Covid restrictions remain in our shop to protect you and our staff, thank you.

Welcome to our new website, its far from finished but we are working hard, please bear with us. 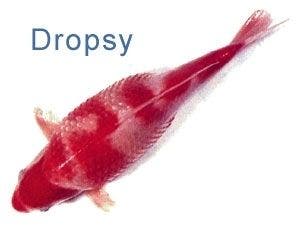 Raised scales (rather like a pine cone) and eyes standing out from the head.

Dropsy itself is not a disease, but rather a result of some other cause. Dropsy is a term given to the swelling that occurs internally in the fish. There are multiple possible causes. Sometimes it's not contageous, but sick fish should be isolated and treated since determining the actual cause may be impossible, and also because this will be easier on the fish.

The fish's body will become swelled with fluid it is unable to expel. Eventually the swelling will cause the scales to raise, giving the fish what is called the "pine-cone" appearance.

Diagnosis, One of these situations may be the cause:

Bacterial dropsy is infectious so treat with an anti bacterial remedy and if possible isolate affected Koi.