All card payments now require a 2 factor authentication -  so please have your device ready!

One of the most common fungal infections of Koi. The fungal spores will grow anywhere on the Koi, including the gills, initially germinating on dead tissue. Their threadlike hyphae release digestive juices which break down the tissue so the fungus can absorb it, as the fungus grows these juices start breaking down living tissue.

Fungus on the body appears as cotton wool like growths, it is hard to tell if a Koi has it in the gills, but if it hangs at the surface gulping for air it is likely.

Carp pox. A virus that produces solid waxy lumps on Koi. It will not kill Koi and is generally harmless, but can look unsightly. It is most often present in small Koi and in cold weather, clearing up disappearing when Koi grow and in the spring when water temperatures rise. 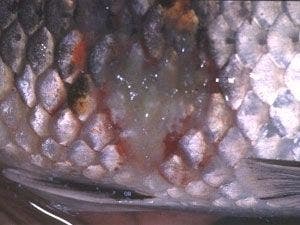