Winter opening hours:  Weekends 10am until 2pm (October to February)

We are open 7 days a week.  9am to 5pm Monday to Friday and 10am until 3pm weekends.  (Winter hours and Bank Holidays may vary) 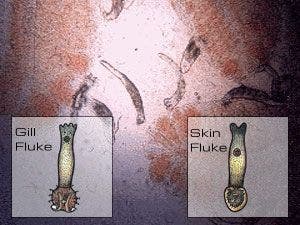 Gill and Skin flukes are two of the family of monogenetic trematode genera, all of which are characterised by the large grappling hooks which are used to attach themselves to their victims.

Affected Koi often exhibit classic signs of irritation and flash, jump or rub themselves against objects in the pond in an attempt to rid themselves of their attackers.
Flukes are not visible with the naked eye. When viewed under a microscope, the parasites are clearly visible as nearly transparent and worm like, and the hooks are clearly visible.

Gyrodactylus is one of two common worm type parasites which the koi keeper may encounter. The parasite is worm like in shape and it has hooks with which the parasite attaches itself to the koi.

This koi parasite reproduces live young. Being hermaphrodites, all of the adults are capable of producing young, and each one will carry a single larval parasite in its abdomen. Further more, this unborn parasite is also developing a larval parasite in its abdomen before they are even born, and in as little as one day after being born, those young can also give birth. So it’s easy to see that this koi parasite is very prolific, and one individual is capable of reproducing into thousands in a short period of time. When viewing this parasite under a microscope you can often see 3 or 4 developing parasites within each other.

Once this parasite is attached to a host koi, it lives and feeds on the mucus skin and blood of the koi. The parasite is capable of surviving without a host koi for five days.

This koi parasite can be treated using Kusuri Fluke M.

This koi parasite is very similar to Gyrodactylus in appearance. It has a set of hooks with which to attach itself to the host koi and these are surrounded by a number of smaller hooks.

The two parasites differ however in their method of reproduction, this koi parasite is an egg layer, and can lay up to two- dozen eggs per hour. Water temperature is important as the reproductive rate increases in warmer water, and decreases in colder water. The same applies to the time required for the eggs to hatch. In warmer water hatching can take only four days, whilst in colder water it may take as long as thirty days. This is a very important fact to remember when treating this koi parasite as most treatments will not kill the eggs, and they can hatch even after treatment and re-infect the fish. For this reason either the initial treatment has to stay active for at least four days, or you must do a second dose of the treatment.

To treat koi infested with this parasite you will need to use Kusuri Fluke M, take further skin scrapes to ensure all parasites have been eradicated.

Treatments for Skin and Gill Flukes